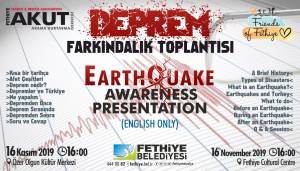 The presentation was delivered by External Relations Manager, Engin Müftüoğlu, and was well attended by local residents and officials from the Fethiye Municipality, including Yavuz Topateş, consul to Fethiye Mayor, Alim Karaca, and Devrim Ozturk, Municipality councillor.

In 1995, an unsuccessful search for two university students lost in the Bolkar moutains prompted a small group of professional mountaineers to establish AKUT. Realising the earthquake risk in Turkey, they completed additional training and are now a pivotal player in raising awareness in preparation for emergencies. All members of the AKUT team are volunteers; the Turkish government officially declared AKUT as an “NGO working for public benefit” in 1999.

AKUT gained classification by the United Nations International Search and Rescue Advisory Group in 2011 and is one of only three organisations in Turkey that has INSARAG classification.

Since operations began, AKUT has saved more than 3,000 lives across 3,500 operations, ranging from mountain rescue to flooding.

The Marmara earthquake, also known as the İzmit earthquake, occurred on 17th August 1999 and had a magnitude of 7.6. 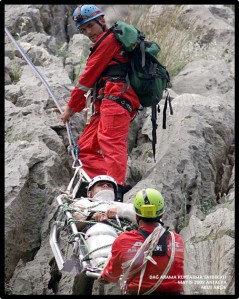 97% of the country and 95% of the population is vulnerable to earthquakes. It is also estimated that 98% of industrial facilities and 93% of Turkey’s dams are susceptible to earthquake damage.

The Anatolian tectonic plate forms part of a complex and comparatively active system of tectonic activity in the region, with three different major fault systems tectonically controlling Anatolia from east to west.

Turkey currently ranks third in the world in the ranking of death toll, caused by earthquakes.

How emergencies are classified

An emergency is an unexpected event that causes death or injury, structural and environmental damage and disruption to day-to-day activities.

A disaster is a situation or event during and after which the emergency response is insufficient or overwhelmed, and are classified as either natural or man-made.

Disaster distribution in Turkey can be broken down as follows:

What to do before an earthquake

Make sure that the building where you live or work has been inspected to ensure that it meets the appropriate building standards.

Make sure that your property and personal items are insured against any loss, resulting from an earthquake.

Identify safe places in your household, children’s school, workplace and any other location that you frequently spend time.

Identify a safe meeting point with your family should you be separated when an earthquake occurs. This could be the local school gymnasium or a basketball court in your local neighbourhood.

Make an emergency plan, which includes the meeting points, and have a regular “drill”, so you all know what you need to do if an emergency occurs.

Make sure that you know how to switch off your utilities. They should be switched off in this order – gas, electric, and then water. However, if there is any smell of gas, do not touch the electrical supply and leave the property promptly.

Make sure that you secure any items that may topple over. This includes objects such as tall bookcases or cabinets and gas bottles.

Make sure that any chemicals are adequately stored.

Prepare an emergency bag. This should include the following items:

In Muğla, you can reach all emergency services by dialling 112. However, emergency numbers may differ depending on the region of Turkey that you are in. If you are planning to travel outside of your local area, you can check what the emergency numbers are using this link (in Turkish).

What to do during an earthquake

The most important thing to do is to try not to panic. Protect yourself in the safe places you have previously identified. If your building is structurally sound and large items have been secured, crouch down or lie on the floor next to something big, such as the sofa, cover your head and hold on to something.

If you are outside, crouch down (as demonstrated in the photo below) and make sure that you are away from any trees or electrical posts. Keep a clear distance from any building and be aware of your surroundings. Do not remain stationary on any roads. 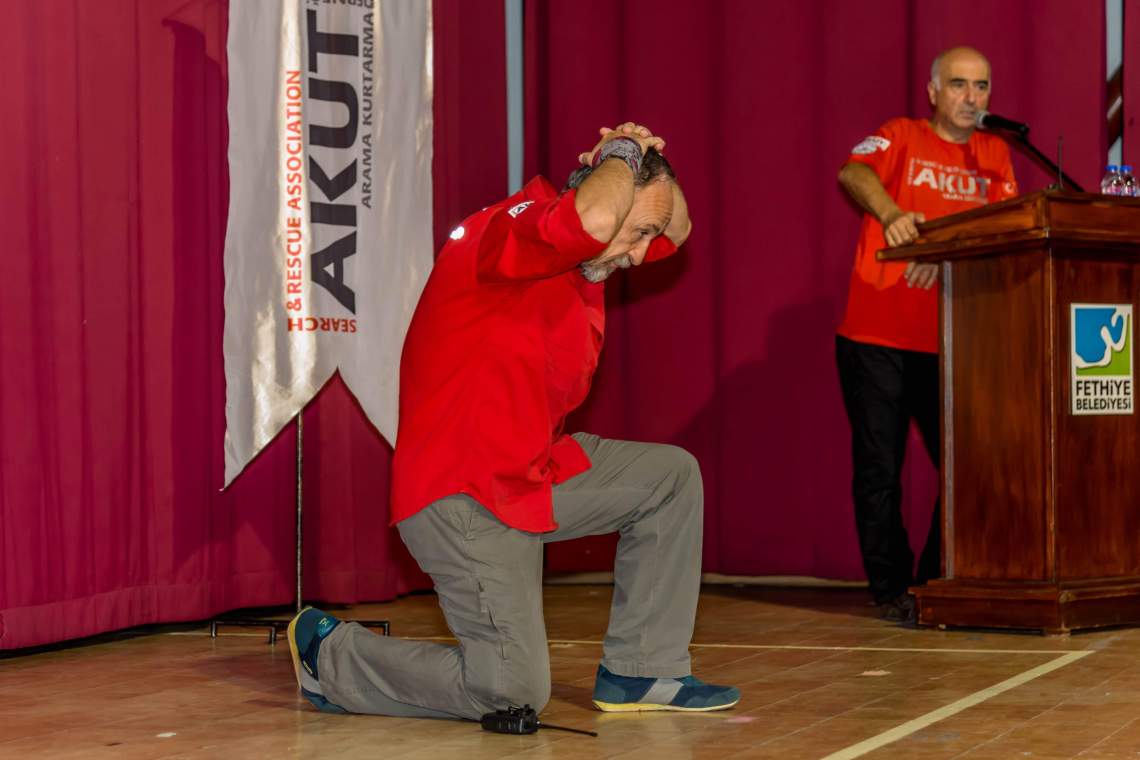 If you are on a floor level above ground, do not use the stairs or attempt to jump from a window. Protect yourself in a safe spot.

What to do after an earthquake

Remain calm and stay with your family. Vacate your safe spot and grab your emergency bag. Switch off the gas, then the electricity and then the water, in that order. Do not touch the electrical mains if there is any smell of gas inside the property, vacate the property quickly and calmly.

Go to your designated meeting point and do not use your mobile phone.

Keep clear from any damaged buildings and do not re-enter any buildings until you are told that it is safe to do so. Do not smoke inside any buildings.

Take photos of any structural damage to your property, if possible, for insurance purposes.

Open any cupboards with caution – things inside may have become dislodged, and there is a risk of something falling out and injuring you.

Expect aftershocks. If they occur, lie down, protect yourself and hold onto something.

What to do if you are under the rubble

Remain calm and try not to panic.

Cover your nose and mouth with a piece of cloth or clothing so that you do not inhale any dust. Try not to move around too much to create dust in the space you are enclosed in.

If people outside cannot hear you, do not waste your energy by shouting. Call for help at regular intervals and strike the building or any pipes with a hard object; solid objects are excellent conductors for sound. If you have a whistle, use it.

Listen to your surroundings and try to communicate with anyone you can hear close by and who may also be trapped. 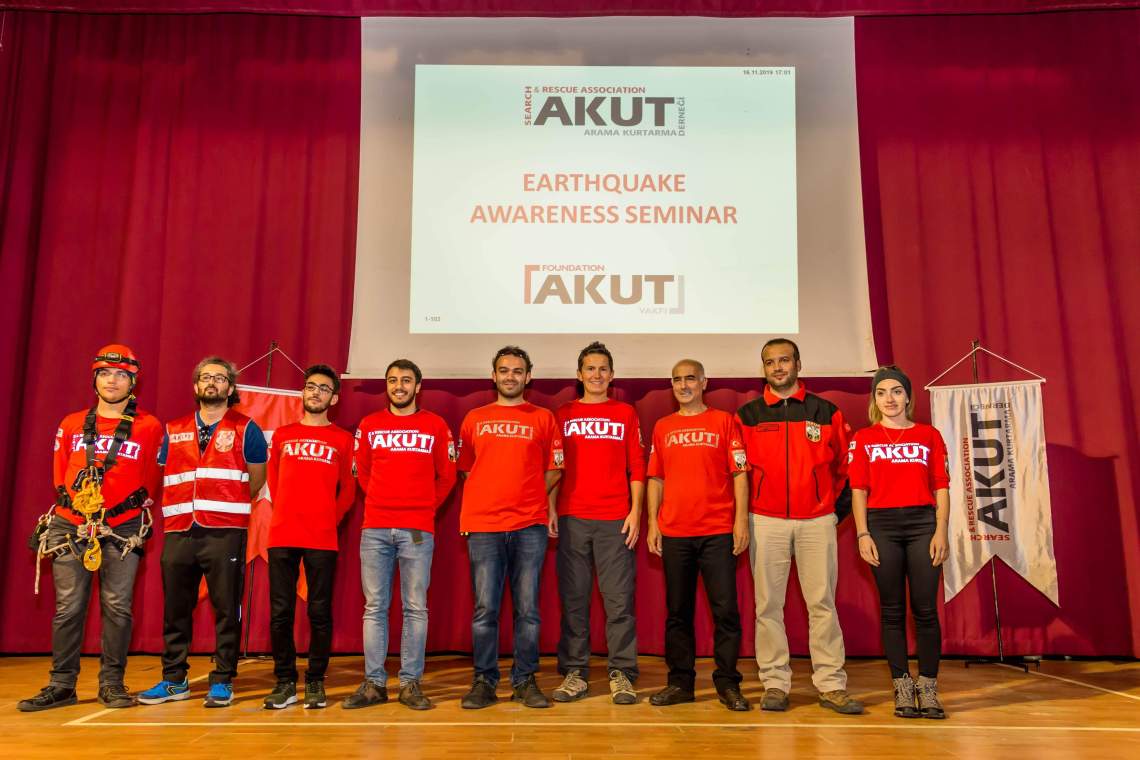 Today, Fethiye has a population of over 150,000 people. According to the predictions of earthquake experts, such as Yoshinori Moriwaki, who held a seminar earlier this week, it is likely that Turkey could see a greater scale event in the decades to come.

By taking the precautions and steps that we have outlined in this article, you will be as prepared as you can be for any emergency that arises.

As a non-government organisation (NGO), AKUT relies solely on donations from the public.

Should you wish to donate to AKUT Fethiye, you can contact them via their Facebook page or via Friends of Fethiye.