If you want a Turkish feel to your kitchen and to add a touch of Anatolia to your meal times, why not head into Fethiye and invest in some typically Turkish traditional kitchen utensils?

If you are living in Fethiye, or visit the area for your holidays, perhaps you have already introduced some Turkish culinary utensils into your kitchen. But here are a few you may not have thought of, or even heard of.

These utensils are used every day in millions of Turkish kitchens. Some of them are part of the country’s cultural heritage; traditions that have changed little for hundreds of years. 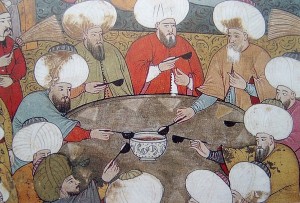 Not only are these utensils very useful and practical, they are very economical to buy. These are the utensils used by ordinary Turkish people in their kitchens. But they can also add a unique touch of Turkishness to yours too.

One of the first things you should do, if you are looking for traditional Turkish kitchen utensils, is head off the tourist trail to visit some of Fethiye’s fascinating old-style and long established shops. There are a few around the fish market well worth exploring.

Wooden kitchen utensils can be found in Fethiye’s markets 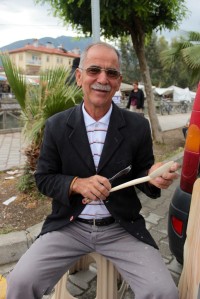 The weekly markets are a particularly good place to look for wooden spoons, for example; beautifully crafted and in all shapes and sizes, they are often sold by the very craftsman who made them. They also sell the traditional pestle and mortar.

Mr Recep in Fethiye’s Tuesday market whittling a spoon made from arbutus.

It is unusual to see many of the more traditional Turkish utensils outside the country. Apart from being useful they also make interesting and unusual gifts. However, there are some you may not know about… 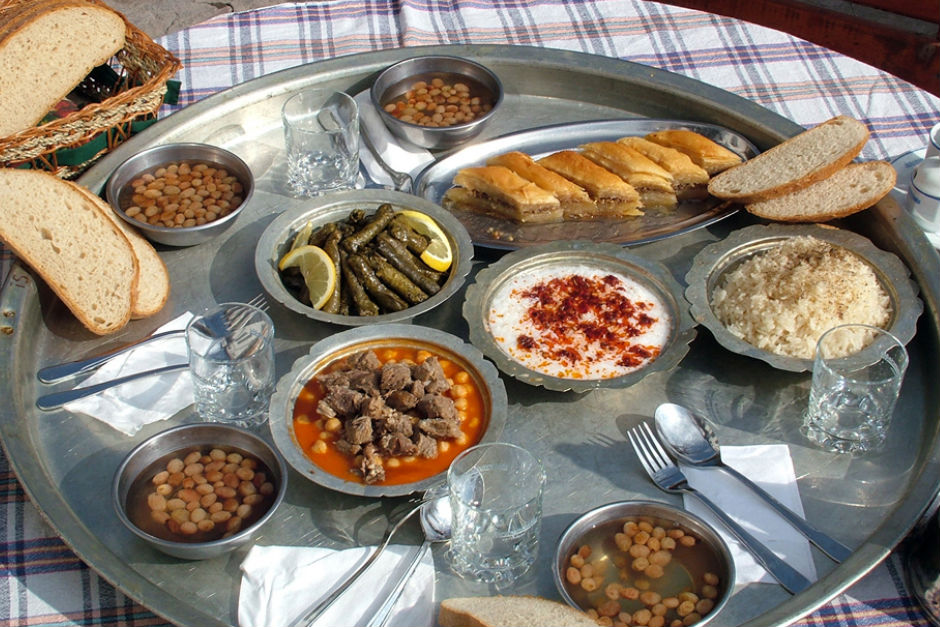 In the traditional Turkish kitchen, there will always be at least one yer sofrası, a tabla or two, and an oklava.

The yer sofrası is where the meal is served in homes across Turkey. It is a tradition that dates back hundreds if not thousands of years. When the meal is ready the family will sit or kneel on the floor, around this low table; their knees and laps covered with a large cloth placed on the floor, under the sofra.

Incidentally, sofra in Turkish not only means table, it is also used to describe the food served on it (or any other table come to that) and is akin to the word spread in English… So, “çok güzel bir sofradır” means “What a beautiful spread!” Not ‘what a lovely table you have…’

A sofra can also be a tray made of metal, some of which are simply huge and intricately etched, while others are simple white enamel or silvered. They are customarily placed on a wooden yer sofrası or a cross shaped wooden frame. If you want to use one as a tray, do so by all means but don’t forget that the bigger they are, the more difficult it is to negotiate a doorway when your sofra is fully laden! 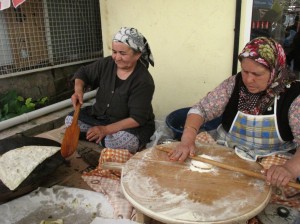 A tabla, on the other hand, unlike the yer sofrası has no legs. It is a board used for making the dough for bread, or for kneading and rolling the flour mix into paper-thin sheets, for gözleme, baklava or börek pastries. This is where the oklava comes in.

An oklava is a long thin smooth wooden stick, like a dowel. The really long ones, for making massive baklava and börek are not unlike wooden broom handles but they are made in smaller, more manageable sizes too.

We’ve been told that they also had (and for all we know still have) a secondary purpose, similar to that of their western counterpart, the rolling pin.

The tabla is used for preparing dough for bread, börek or baklava. In the photo above, gözleme are being made and the oklava is used to roll the dough until it is paper thin.

A simple way to grill vegetables 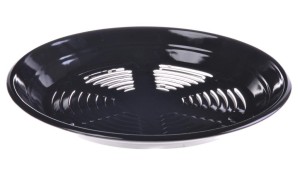 If you enjoy eating Turkish aubergine salad or red pepper salad, you will know that in Turkey the aubergines and peppers are chargrilled over hot charcoal, or in the embers, to get that delicious smoky flavour.

Not everyone has a barbecue or fire going 24/7 but this quirky enamelled plate, the köz matik, is perfect for blackening the skins over the gas flame on you hob without letting the juices from the cooking vegetables damage the stove’s surface. 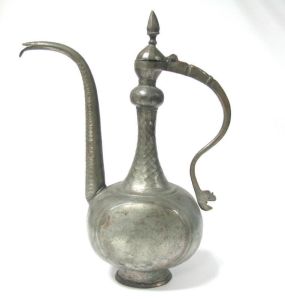 An ibrik is a pot that has a long spout. Why not use one for storing olive oil, for example? They come in many different sizes. If you find a shop selling old or new ones (sometimes made to look old), you may also come across sürahi, a metal jug with a cover. These have a lip rather than a spout and are traditionally used for water.

You may also find elegant copper bowls, or Sahan, as these are called. These are usually made from copper and lined with tin; they are mostly from southern Turkey, particularly Gaziantep and the surrounding region, where some very ornate ones are made.

Some are relatively flat with lids while others are open flat-bottomed dishes, with two handles. These are used for cooking delicious Turkish menemen; that’s spicy scrambled eggs to the uninitiated. Sahan, whatever their shape make perfect oven to sofra ware… for all sorts of dishes, not just menemen.

All the traditional Turkish kitchen utensils we’ve described will bring a little bit of Anatolia into to your home, so you can enjoy life the Turkish way, whether or not you are in Fethiye. Now isn’t that a good idea?