Turkish cooking is renowned for its sweet, syrupy desserts like baklava and şekerpare but is equally famous for this more peculiar offerings, such as its cheesy dessert from the southeast of Turkey called Künefe, and Tavuk göğsü, a Turkish dessert (milk pudding) made with chicken meat. 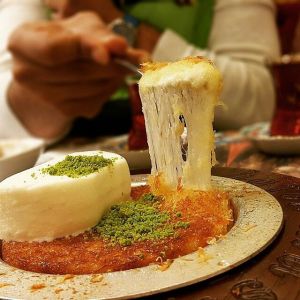 Künefe is a crispy, cheese-filled dessert made with kadayıf. It’s served hot out of the oven so the cheese is soft and stringy, and served in a shallow, round metal pan that’s especially designed for making this dessert.

The recipe for künefe is believed to have originated from the city of Hatay although many cities in this region lay claim to inventing künefe, with cities such as Mersin, Adana, Gaziantep, Kilis, Şanlıurfa, Diyarbakır and Mardin all having their own local variations of the dessert.

Whilst the recipe itself is fairly straightforward, künefe is almost never made at home.

However, for those wishing to have a go, here are some instructions that we found online:

The main ingredient is kadayıf, a finely shredded dough that has been partially baked to dry it.

Tavuk göğsü became one of the most famous delicacies to be served to the Ottoman sultans in the Topkapı Palace and is today considered a ‘signature’ dish of Turkey.

The traditional version of this dessert uses chicken breast meat. The meat is softened by boiling and broken down into very fine fibres. Modern takes on the recipe often pound the meat down into a fine powder instead. The meat is mixed with milk, sugar, cracked rice and usually with some sort of flavouring such as cinnamon. The dish is more or less indistinguishable from blancmange in appearance, a dessert that was common in the upper-class cuisine of Europe.

Should you feel brave enough to try it, here is the recipe: