With multiple additions and renovations throughout their long history, they are one of the greatest and most intricate defence systems ever built.

Initially constructed by Constantine the Great, the walls enclosed the city on all sides, protecting it from an attack from either land or sea. The famed double line of the Theodosian Walls was built around the 5th century and were almost impenetrable from any attack. Only the advent of gunpowder siege cannons rendered the fortifications obsolete, resulting in the final siege and fall of Constantinople to the Ottomans on 29th May 1453.

The walls were largely preserved during most of the Ottoman period, until sections began to be pulled apart in the 19th century, as the city expanded beyond its medieval boundaries. Despite the subsequent lack of maintenance, many parts of the walls have survived and are still standing today.

The walls consist of many layers of walls and gates, a brief summary as follows:

The Walls of Byzantium and Constantine
The original fortifications of the city were built in the 8th century BC. At the time the city consisted of an acropolis and little more. Byzantium, despite being a prosperous trading post, was relatively unimportant during the Roman period. Septimius Severus had the walls demolished around 196AD, following a siege which had lasted for 3 years. However, he rebuilt themt, appreciating the city’s strategic importance, and added many monuments and a new set of walls, increasing its surface area.

The Yedikule Fortress (The Castle of Seven Towers)
The first fortress is positioned behind the Golden Gate. It originally had five towers but was destroyed after the city fell to the Fourth Crusade. It was rebuilt in 1350 and the new fort featured five octagonal towers, and two marble towers of the Golden Gate, becoming known as the Eptapyrgion (“Seven Towers”). However, in 1391, Byzantine emperor John Palaiologos V was forced to demolish the fort by Sultan Bayezid I, who threatened to blind his son Manuel, if he did not. Emperor John Palaiologos VIII attempted to rebuild it in 1434, but was prevented by Sultan Murad II. After the final capture of Constantinople, Sultan Mehmed II rebuilt the fort in 1457, again with seven towers (four on the Inner Theodosian Wall and three larger ones behind, and named Yedikule Hisar (Turkish for “Fortress of Seven Towers”). During much of the Ottoman era, it was used as a treasury and state prison.

The Golden Horn Wall
The wall facing towards the Golden Horn stretched for a total length of 5,600 metres from the Cape of St. Demetrius to the Blachernae, where it joined the land walls. However, much of the wall was destroyed the 1870s, during the construction of a railway line.

The Theodosian Walls
The double Theodosian Walls are located about 2km west of the old Constantinian Wall and were built during the reign of Emperor Theodosius II, after whom they were named. The initial construction consisted of a single set of walls with towers, which now forms the inner ring.

The Propontis Wall
The wall of the Propontis was built almost at the shoreline and was a total length of almost 8460 metres, with a further 1080 metres forming the inner wall of the Vlanga harbour. Several sections of the wall were damaged during the construction of the Kennedy Caddesi coastal road in 1956-57. 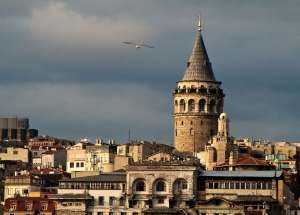 The Walls of Galata
Galata, was not fortified during most of the Byzantine period, save the great tower. The Galata Tower, then called Christea Turris (“Tower of Christ”) and another stretch of walls to its north were built in 1349. Further walls followed in 1387, 1397 and 1404, which enclosed an area stretching from the modern district of Azapkapı north to Şişhane, and then to Tophane and to Karaköy. After the Ottoman conquest, the walls were preserved until the 1870s, when most were demolished to facilitate the expansion of the city. Today only the Galata Tower remains intact and is an iconic building within the modern city of Istanbul.

The Anadolu and Rumeli Fortresses
The twin forts of Anadoluhisarı and Rumelihisarı lie to the north, at the narrowest point of the Bosporus. They were strategically placed by the Ottomans to govern the waterway in preparation for their final assault against Constantinople. Anadoluhisarı (Turkish for “Fortress of Anatolia” was built by Sultan Bayezid I in 1394.  The larger and more elaborate Rumelihisarı (“Fortress of Rumeli”) was built by Sultan Mehmed II in 1452. After conquer of Constantinople, they served as a customs checkpoint and prison. They suffered extensive damage in the earthquake of 1509, but were repaired and continued to be used until the late 19th century.