In Turkish cuisine, ‘meze’ is often served as a starter or an accompliment to the main meal but can sometimes be the meal itself!

Turkey is known for the abundance and diversity of its food and the legacy of the Imperial Kitchen is inescapable; dozens of chefs, each specialists in different types of dishes and all wanting to please the royal palate! The provinces of the Ottoman Empire were connected by a system of trade via the silk routes and, in 1453, the spice trade was under the full control of the Ottoman Empire. Only the best ingredients were allowed to be traded and hefty taxes were applied!

In Turkey, despite the Islamic prohibition against alcohol, there is a rich tradition associated with drinking alcohol in the company of family and friends at home and in restaurants, is a part of special occasions. Mezes start the meal off and are eaten along with wine or, more likely, “rakı”. 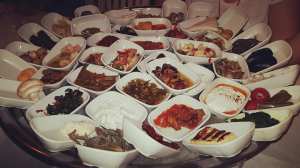 You’ll find some form of ‘meze’ wherever you go. Whether you eat at a small corner restaurant or go to a fine restaurant in one of Turkey’s big cities it is commonplace for the serving staff to bring ‘meze’ selections to the table, presented on a huge tray for you to choose from.

Traditionally, zeytinyagli dishes (vegetables cooked in olive oil) are prepared in advance and served at room temperature. Once cooked, you can store in the fridge for a good 2-3 days.

The Turks are picky about their beans, hence ‘taze fasulye’ literally means ‘fresh beans’, preferably plucked straight from their vegetable garden to the pot.

This is a Southern Turkish style kebab, using aubergines. In the Southern part of Turkey, especially in the regions of Gaziantep and Antakya, locals will use up the left over grilled or barbecued eggplants to make this the next day. It is tradition to prepare the kebab at home and then take the tray to the local bakery to be baked in the wood fired oven.

‘Dolma’ means ‘stuffed thing’ and ‘Sarma’ means ‘wrapped thing.’ These are general terms used to describe different vegetables and leaves that come stuffed with meat and rice. In Turkey, favourite vegetables for stuffing include aubergine, peppers, tomatoes, and onions. For wrapping, the most popular are vine leaves and cabbage.

A popular dish made with red lentils and bulgur, and is known as the meatless meatball! You can even make them a day or two beforehand as they store very well in the refrigerator for several days. In fact, the longer the meatballs rest, the tastier they become.

‘Ezme’ is a Turkish word meaning ‘crushed’. You’ll see the word used to describe any other Turkish food that involves a bit of crushing, smashing or grinding. Antep Ezmesi is from the South-east of Turkey and is a spicy tomato and pepper salad dip.

Plain yoghurt is a staple in Turkish cuisine.
It’s used for everything from appetizers and salads to soups, toppings and desserts. ‘Cacık is made with yoghurt with cucumbers and herbs and is a very simple dish that’s served cold. If making at home, make sure you eat your cacık fresh the same day, as cucumbers will become soggy if kept in the fridge for too long.