Translated as “Tower of Forgiveness”, Af kule is an ancient monastery, located in the village of Kayaköy. 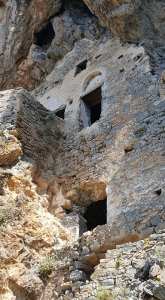 Clinging to the high cliffs over the sea, the site affords some really impressive views over the Gulf of Fethiye, as far away as Rhodes if the skies are clear.

Legend has it that the monastery was built by Ayios Elefterios, a monk from 11th century and the whole structure has been built with stones, with rooms carved out of the rock face. Other sources say that it was built in the 1800s.

Whichever is the case, the ruins are remarkably intact, and you can climb the stairs to two levels of the structure, to view the rooms from the inside. The monastery was abandoned in the 1920s, at the same time as the nearby Ghost Town.

To get there, there is a short but quite demanding hike up and down a stony trail, through a beautiful pine forest. During our hike up there, we could hear the jangling of goat bells nearby and almost stepped on an Ottoman Viper, sunning himself on the path! Most of the trail is covered, making it a pleasant hike, but it is quite a steep climb at times and the descent down to the monastery is covered with loose gravel, so it’s quite easy to slip!

Perhaps not for the faint hearted, you can further explore the lower levels once you get to the monastery. Again, it is quite a steep climb down and it is a whopping 400 metre drop to the sea below.

There are also some sunken chambers, with openings to peer into, which are not immediately visible as you approach them. So, when exploring the site, please be cautious at all times!

In total it takes about an hour to get there on foot, if you are walking from the Ghost Town. To the west of Kayaköy, you leave the gravel road to Gemiler, where the trail to Af Kule branches off. You will see it signposted and the trail itself is waymarked with red and yellow markers. There is also a parking area, for those not wishing to make the entire hike on foot.

All in all, Af Kule is an amazing place, with breath-taking views and is an absolute must for anyone visiting the area.  A very tranquil setting, it does make the perfect spot for a picnic! 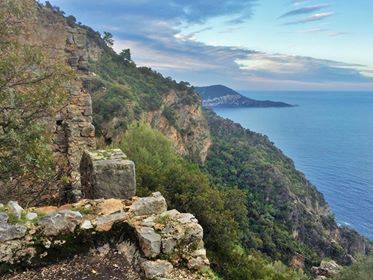