The music scene is still very much developing in Fethiye but that isn’t to say there aren’t some excellent musicians around!  We decided to go out and talk to a few.

Our first interview was with the band “The Bluestone”. 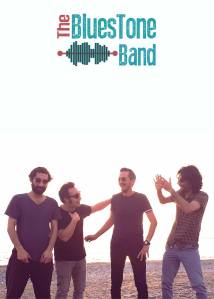 Who are the members of the band?

How long have you been playing together as a band?

We originally formed in 2002 as a trio so we have playing together for the last 16 years.  Ozan joined us in 2015 so we’ve been playing as a quartet for the last 3 years.

Where did you learn to play?

Myself (Selçuk), Aziz and Caner all taught ourselves. Ozan took lessons from Engin Recepogullari in Izmir in 2005.

What musician inspires you?

Aziz: Jaco Pastorius, an American jazz bassist. He played a 1962 Fender Jazz Bass, which he called the Bass of Doom!

Caner: Buddy Rich, an American jazz drummer and bandleader, who is widely considered one of the most influential drummers of all time.

Selçuk: Jimi Hendrix, an American rock guitarist, singer, and songwriter, who is regarded as one of the most significant electric guitarists of the 20th century.

What kind of music does the band play?

We play a combination of Blues, Classic Rock and Turkish Rock covers. We are planning on writing our own original material during the winter.

You play almost every day during the summer months but do you play any gigs out of season?

Yes, in the winter you can find us at Deep Blue Bar, Fethiye on a Friday and at Kafe Bahane Çalış on a Saturday night.

There are also live music sessions at Deep Blue Bar on a Monday night, hosted by the Müzik Garaj, Fethiye, so that also gives us an opportunity to have a jam!

What are your general thoughts on the music scene in Fethiye and how do you think it could be improved?

It is still growing up. There are some good bands playing but we need more professional live music bars, where bands can play. The current music scene lacks good stages, sound systems, lighting and advertising!

Aside from the local bars and restaurants, do you also play at social gatherings, such as weddings or parties?

Yes, if we are available, we are more than happy to play at your special days.

If someone wants to book a gig, what is the best way to contact you?