Sam and Freddy McCauley, a British father and son, explain their decision to move from their London home to Fethiye and together with volunteer trainer John Hockton, chat about their mutual passion for boxing.

It soon becomes clear that Freddy McCauley likes his new life in Fethiye. He, together with his parents, arrived in Turkey 18 months ago and with the help of private lessons, he is quickly learning the language. Apart from school, which he says he thoroughly enjoys and where his favourite subject is sport – specifically football, the 15 year old’s main passion is boxing. According to his father, Sam, this passion runs in the family. Freddy has two older brothers who also boxed; one winning the Golden Gloves and the other winning the Three Nations Championship – with competitors from England, Wales and Scotland.

Currently the only English member of the club, Freddy visits the newly decorated facilities of Fethiye Gençlik ve Spor Kulübü (Fethiye Youth and Sports Club) three days a week, where, under the watchful eye of his father, he trains with professional boxer, Sezer Olpak and volunteer trainer, John Hockton.

While Freddy does circuit training, Sam explains that he thinks Fethiye is a better, healthier environment for his son: “Before coming to Turkey we lived in Southeast London but we were becoming increasingly concerned about how the culture is negatively impacting on today’s youngsters. It’s sad to have to admit it, but both drugs and alcohol are an increasingly serious problem in the city and not giving in to peer-group pressure is making life really tough for London’s kids. All this, together with street violence, got so bad we felt it would be better for us to get out and, as we love Turkey, we decided to make a new life here in Fethiye.” 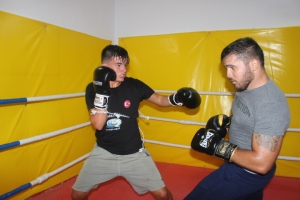 Freddy is very happy that his parents took this decision. When asked what he likes best about Turkey, he immediately responds with “I like the people – and boxing.” Although all too often boxing used to be seen as the choice of bad boys, who loved fighting for its own sake, nowadays the sport is better regulated and is becoming increasing popular; regarded by many as a noble art form and sport.

Since the age of seven, Freddy had been an enthusiastic member of a boxing club in Eltham. He was therefore delighted to spot the club in the Patlangıç neighbourhood of Fethiye. The  world of boxing has close ties. Even so, when Freddy and his dad met volunteer trainer John Hockton they were delighted to discover that he not only knew the Eltham club, he also knew its trainer, Steve Barrett.

Now, three evenings a week father and son head to the boxing club where Freddy is working on his punching and footwork skills, so he will eventually be ready to compete. John explains, “We are sorting a match out for Freddy at the moment. He will be competing in the Under 16s age group and it will be against a competitor from a boxing club in Muğla town. We are also hoping to organise matches for him in Bodrum, Marmaris – anywhere like that.” There are scores of amateur boxing clubs all over Turkey, so Freddy could end with plenty of opponents on which to test his skills. 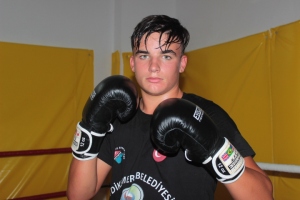 Asked if he would eventually like to box at a higher level, Freddy responds modestly: “I’d like to try and I’d like to box for Turkey, if I could.” When asked what’s so great about boxing, Freddy loses his shyness: “Boxing isn’t about fighting,” he says, “it’s about discipline, fitness, respect; respect for yourself and other people.” He also says, as well as helping youngsters to keep fit and lose weight – so often a problem these days, where fast food, lounging on the sofa watching TV and playing on computers for hours on end, is leading to obesity amongst teens and even younger kids.

As well as giving youngsters self-esteem, boxing gets rid of aggression, yet at the same time is a highly disciplined sport. It could also be that boxing is a sport that instils modesty, as it makes youngsters more aware of their own vulnerability. Sam explains that “outside of the ring boxers are all humble… it keeps their feet on the ground.” John adds, “It keeps them off computers, smoking, drugs and alcohol. It is a sociable sport; also, the kids get to meet people of different ages.” Freddy says his school friends think boxing is cool – and deters bullies.

This results in what must be the inevitable question, especially from someone who doesn’t know anything about boxing, “aren’t you scared of getting hurt, Freddy?” but he says he has only been injured once… he got a black eye during training but according to statistics, boxing is no longer the dangerous sport it once was. Indeed, there is evidence to show that boxing’s safety record had improved and it has now been ranked 75th by RoSPA on its list of the most dangerous sports, behind rollerblading, gymnastics and horse riding.

The McCauley’s are not the only Fethiye based families to think boxing is a great sport. The club is gradually reaching out to more of the town’s youngsters. Although learning Taekwondo is more widespread among youngsters in Turkey, boxing is also being increasingly seen as a discipline through which it is possible to achieve and maintain physical condition.

As John explains, young students like Freddy have to compete at several championship levels, each progressively tougher, before reaching the ultimate goal of boxing for Turkey but as Freddy already has a Turkish amateur license he is already on the first rung of the ladder. He is also delighted to report that the boxing promotor, Steve Goodwin, who has a holiday home in the area, brought a group of young British boxers to Fethiye for a summer training camp a few years ago. “I’m optimistic” says John, “that Fethiye is on its way to becoming a centre of excellence for boxers everywhere.”