The distinctive golden sand of Cleopatra’s Beach – one of the most famous sites in Turkey – has long been the subject of legend. It was said that the Roman leader and general, Mark Antony, arranged for this sand to be shipped from Alexandria in Egypt to create the perfect beach for his lover Cleopatra, on the island of Sedir in Gökova Bay but now Turkish scientists have finally put paid to this romantic myth. 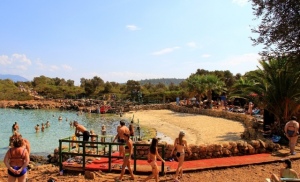 The sandy beach on Sedir Island in Gökova bay is visited by thousands of tourists every year and is under special protection but following an analysis by geologists from Muğla Sıtkı Koçman University, it has been established that the golden sand did not come from Egypt after all, as long claimed in the myth, but existed 1,500 years prior to the formation of the sand in Egypt.

The golden sand, which is only found in Egypt (Alexandria) and on Sedir Island, has been analysed  by geologists from the Department of Geological Engineering at Muğla Sıtkı Koçman University (MSKÜ), as part of the 2009 European Union Project, the Administration of the Integrated Coastline of Gökova Inland and Sedir Island. A comparison between the geological composition and the age of the sand has revealed that the sand at Sedir Island did not come from Egypt but existed one thousand 500 years before the sand found in Egypt. 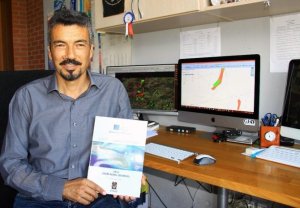 Professor İlkay Kuşçu,  from the Department of Geology of the Faculty of Engineering at MSKÜ, together with a team of five from the Department of Physics, Geology and Mining Engineering, studied samples of sand from Sedir Island and Alexandria. Kuşçu remarked that there were various claims about the sand on Sedir Island: “It is rumoured that these sands were transported from the beach at Alexandria in Egypt.  We decided to take samples from Alexandria and Sedir Island and compare them on the basis of dimension, shape, morphology, smoothness of the surface, differences and/or similarity of the particles’ core, which is encased by the sand as it forms and ages.”

Continuing, Kuşçu said: “First of all, we studied the dimensions. The average dimension of the particles is different. Those from Sedir Island are slightly smaller than those from Alexandria. We concluded that this could be due to erosion, so then we analysed the core of the particles, and compared the number of carbonates surrounding it. In those from Sedir Island the number of surrounding carbonates is higher than those from Egypt. This could also be due to erosion.  Therefore we decided to investigate the minerals in the core.  During the analysis, we realized that the core of the sand particles from the Sedir Island  are made up of particles from this region, called ooids. This is definitely not the case with the samples from Egypt. We then studied their morphology. In other words, we looked at the smoothness of the surface using an electron microscope. Sand particles from Egypt had a smoother and rounded morphology while the surface of those from Sedir Island were rougher and contains fragments of sea shell. This showed that they were entirely different. If their origin had been similar they would have the same features. At this stage we determined that they had been formed under different circumstances. Then we investigated the inner chemistry of the surrounding carbonates using a scanning electron microscope and made EDS analyses. From this we were able to establish that the chemistry of these two types of sands is entirely different.

Kuşçu said that they also studied the age of the two sands: “If they had been formed in the same location, they should have been at the same age. For this purpose we collaborated with an American university to establish the age of the carbonated minerals and find an answer to the question of how many thousands of years ago they had been formed. We sent sand samples taken from Alexandria and Sedir Island. It was no surprise when we were told that the analysis determined that the sand from Sedir Island was in existence 1,500 years earlier than the sand from the beaches of Alexandria. We had already concluded that they had different origins.”

Professor Kuşçu said that this research clearly showed that the romantic story about Mark Anthony was no more than a myth. It also revealed that there was no sand at Alexandria at the time of the sand formation at Sedir Island and the age, chemistry, formation and morphology of the sand particles are different. “These two types of sand are not of the same origin. In other words, Mark Antony did not transport the sands from Egypt in sixty ships for Cleopatra, as the myth claims,” Kuşcu concluded.

Courtesy of Land of Lights