In October 2016, a photo of perfect spiral cloud formation over the Aegean sea, with a golden sunset in the background, enchanted social media users and was widely shared.  The caption was “Stormy Sunsets in Fethiye” and was taken by photographer Ilkgul Menzil. 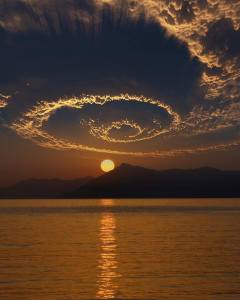 The image was later shared on her Instagram page to endorse Liberty Hotel, where she noted that she was accountable for the original photo, and also the subsequent editing!

Whilst beautiful, Ilkgul Menzil cleverly combines her photography with digital editing in order to create some truly stunning pictures. However, while her work may motivate us to jump on the next plane, unfortunately it may not depict real-world phenomenon.

However, such cloud formations can and do exist and are generally attributed to jets flying through the sky and creating condensation trails.

Similar clouds formations were recorded in Tunisia in 2014.